Goosegrass is one weed that can be especially difficult to get rid of, but with the right herbicide, you can eliminate it in no time. On this page, we’ll take a look at the best herbicide for Goosegrass and how to use it effectively. Keep reading to learn more.

Syngenta Tenacity Herbicide (Buy Online) is a popular choice for those looking to control Goosegrass. Tenacity can be used as both a pre-and post-emergence herbicide, making it a versatile tool in the fight against weeds.

The active ingredient in Tenacity, Mesotrione, is a naturally occurring compound extracted from the bottlebrush plant. Mesotrione inhibits photosynthesis, causing the leaves of treated plants to lose chlorophyll and turn white and die.

However, while Syngenta Tenacity is effective at controlling Goosegrass, it may require multiple applications to see results.

Syngenta Tenacity has also been recognized by the EPA to pose minimal risk to human health and the environment. Making it a better choice to use in sensitive areas than most of the other herbicides on this page.

Dimension 2EW Dithiopyr Pre-Emergent Herbicide (Buy Online) is one of the best options for preventing and controlling Goosegrass. This herbicide features excellent preemergence and early-postemergence control of Goosegrass, as well as season-long control of other grasses and broadleaf weeds. The only downside to Dimension 2EW is that it is relatively expensive. However, its long-lasting weed control makes it a worthwhile investment for anyone hoping to keep their yard looking its best.

Triclopyr 4 EC (Buy Online) is a post-emergent herbicide that is effective at controlling Goosegrass with little to no impact on lawns or ornamental grasses when used in conjunction with topramezone.

Triclopyr 4 EC is easy to use and can be applied with a hand pump or a backpack sprayer. Plus, it is also rainfast in a matter of minutes, so you don’t have to worry about rain washing it away before it has a chance to work.

Ortho GroundClear Super Weed & Grass Killer1 (Buy Online) is a post-emergent herbicide for Goosegrass that boasts fast results, completely killing weeds in 1-2 weeks. It is rainfast in 15 minutes, has a continuous spray Comfort Wand, and comes in a handy size for small areas.

However, Ortho GroundClear Super Weed & Grass Killer1 is slower to work on grassy weeds than some other herbicides, and it’s best suited for Goosegrass that pops up along driveways in sidewalks.

SpeedZone Southern Broadleaf Herbicide (Buy Online) is a fast-acting, highly selective post-emergent herbicide for goosegrass control in southern turf. SpeedZone Southern kills Goosegrass within hours and requires only one application per season. And it is safe to use on all types of turfgrass, including Bermudagrass, Centipedegrass, St. Augustinegrass, Zoysiagrass, and Buffalograss.

Bayer Acclaim-Extra Selective Grass Herbicide (Buy Online) is one of the best post-emergent herbicides for Goosegrass. It’s a selective post-emergence herbicide that controls annual and perennial grasses, including crabgrass and Goosegrass, without harming the surrounding grass.

Yard Mastery Prodiamine 65 WDG Professional Pre Emergent Weed Killer Herbicide (Buy Online) is a pre-emergent herbicide that will help to suppress new growth of Goosegrass. This product comes in an easy to dissolve granule that can be mixed with water and applied using a pump sprayer. It has a recommended application rate of 5.2 g per 1,000 sq ft and will cover an area of 27,000 sq ft. Overall, this is a good pre-emergent herbicide to use if you are looking to control Goosegrass before it gets a foothold in your yard.

What is Goosegrass and How Do You Get Rid of It?

Goosegrass, scientifically known as Eleusine indica, is an annual plant that can be found in many temperate climates. While it is not a harmful plant, it can be pesky and difficult to get rid of. Below, we will discuss what Goosegrass is, how to identify it, and how to get rid of it. 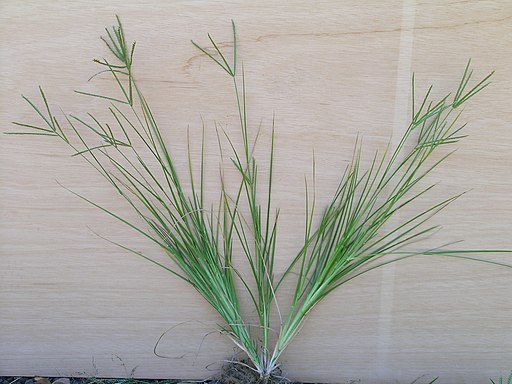 Goosegrass can be identified by its multiple stems that grow from a central root in a rosette pattern. The leaves of Goosegrass are flat and dark green with a silver or gray base. The stems of Goosegrass are hairy and can range in height from half an inch to 2 feet tall, and it is often found in disturbed areas such as patchy lawns and disturbed soil.

If left uncontrolled, Goosegrass can compete with desirable plants for space and resources, reduce the growth of surrounding plants, and create an unpleasant appearance. Therefore, it is important to know how to identify Goosegrass so that it can be controlled before it becomes a problem.

How to Kill and Prevent Goosegrass

Mechanical removal is the most effective method of controlling Goosegrass. The best time to remove Goosegrass by hand is before it sets seed in late summer or early fall. You can also use a rotary tiller to destroy the young plants before they flower and set seed.

You can use a garden hoe to scrape up lightly-rooted adult plants or grab the whole plant at the base and pull it up by hand. Once you’ve removed as much of the root system as possible, bag the Goosegrass up and dispose of it in the trash.

There are several herbicides that can be effective in controlling Goosegrass and other grassy weeds. Among the more common and effective ones are Tenacity and Speedzone Southern Goosegrass.

To achieve optimal control, apply the herbicide early in the season before the Goosegrass has a chance to mature and flower.

Goosegrass is a tough, resilient weed that can be difficult to kill. However, there are a few herbicides that are effective against it. Tenacity is a popular choice for Goosegrass control, as it kills the weed quickly and prevents regrowth.

Another common choice is Dimension 2EW Dithiopyr, which offers long-lasting protection against a variety of weeds, including Goosegrass.

Finally, Prodiamine 65 WDG is a pre-emergent herbicide that helps to prevent Goosegrass seeds from germinating in the first place.

Goosegrass can be killed with the herbicide Tenacity. The active ingredient in Tenacity is Mesotrione, and it works by preventing the plant from making chlorophyll, which is necessary for photosynthesis. Without chlorophyll, the plant can’t produce energy, and it will eventually die.

Quinclorac WILL NOT kill Goosegrass. It is only effective on broadleaf weeds. For best results, use a product that is specifically labeled for goosegrass control.