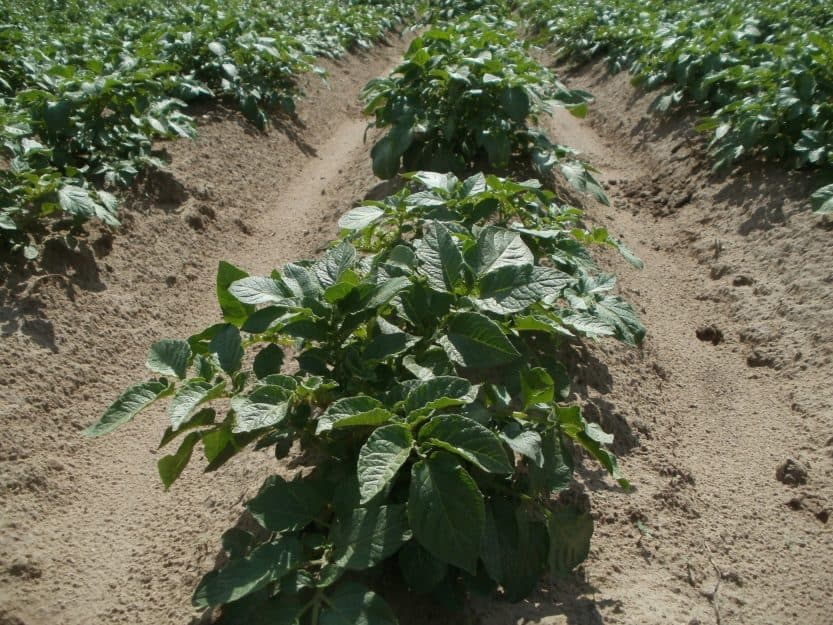 Potatoes are a good addition to any garden because these high-calorie tubers can provide a substantial amount of calories from a small area of your garden. Potatoes are also a very good source vitamin B6, and a good source of potassium, copper, vitamin C and manganese.

Unlike most garden crops, the real advantage of growing potatoes is that potatoes can be used in almost any meal. Potatoes have a myriad of uses, such as hash browns for breakfast, chips with lunch, or a big baked potato with dinner; so a potato can act as a staple crop in most gardens.

Potatoes come in a wide range of shapes and colors, from oval, white potatoes to round, red-skinned potatoes, all the way to small, purple-skinned and purple-fleshed potatoes. Besides coloration, the major consideration for a gardener is a potato’s maturation period.

Early and mid-season potatoes tend to be ready for harvest in 60-90 days.

When choosing a variety, take into consideration how long the growing season is in your area. Even if you have a long growing period, you can plant early, mid and late season potatoes, for a successive harvest throughout the season.

When Should You Plant Potatoes?

Potatoes prefer to grow in cool weather, preferring temperatures below 85 degrees Fahrenheit (29.4 C). Because of this fact, it is best to plant your potatoes as early as possible, once the soil can be worked in the spring.

If you live in a warm climate, you can plant potatoes in the late-fall/early-winter for a spring harvest, in order to avoid the heat of the summer. Potatoes are usually started from “seed potatoes,” which are usually purchased from suppliers that carry certified, disease-free stock.

Can You Plant Potatoes from the Store?

Even though it is possible to plant a potato from the grocery store, it is not recommended, as they can introduce soil-borne diseases into the garden.

If you have time before you plant your “seed potatoes”, you can let them sit on a windowsill for a couple weeks to sprout, before placing them in the garden. If any seed potatoes are larger than a chicken’s egg, then, a couple of days before planting, you can cut them into pieces leaving two eyes per section. 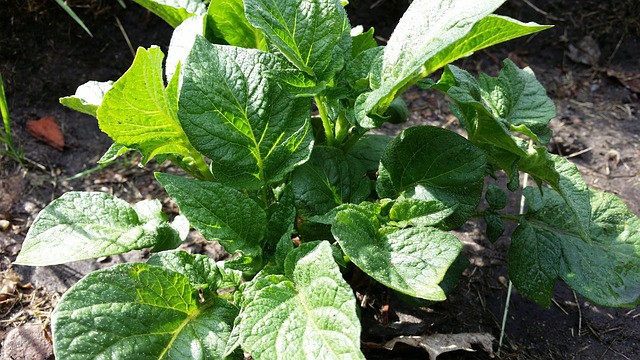 Preparing the soil for potatoes can be somewhat of a more involved process than for most crops. Make sure the location you choose has good sun exposure and the soil has good drainage.

You should aim for your soil to have a pH of 5.5 to 6.5, as a higher pH can lead to your potatoes developing scab. Scab is a disease that produces black lesions on the skin and outer flesh of the potato, which usually occurs only in neutral to alkaline soils.

When preparing the soil you can dig trenches 6 inches (10.2 cm) deep in rows with a 2 foot (40.8 cm) spacing. Another method is to mound hills, about 6 inches (10.2 cm) high, for each potato plant. In either case, make sure the soil is nice and loose and is as free of obstructions as possible, so the potatoes can form properly without becoming misshapen.

Once the soil has been prepared and the risk of any further hard frosts have passed, you can plant your “seed potatoes”.

If you are planting directly into the ground, just dig a hole 8 inches (20 cm) deep, every 12 inches (30.5 cm), and drop the potato right in. Once the seed potatoes have been planted, you can water them, if the soil is especially dry; otherwise, the potatoes should sprout with normal spring rainfall. 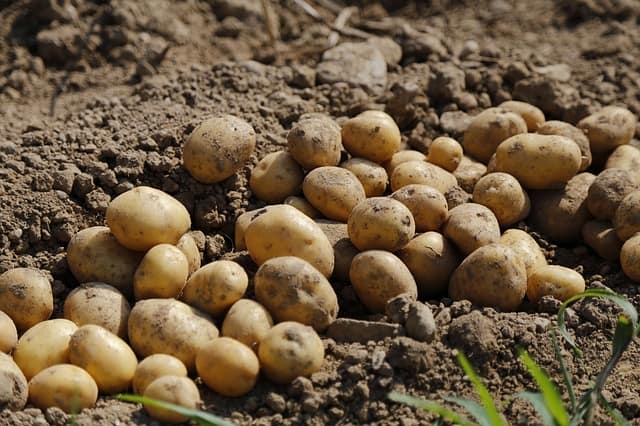 Potato plants will require at least 1 inch (2.5 cm) of water every week throughout the season. When the plants go into flower, that is the time the plant will need the most consistent moisture, as the tubers will be forming, so be sure to never let the soil dry out at this time.

Potato plants have their fair share of pest and disease problems to contend with, ranging from the dreaded potato blight to Colorado potato beetles. If blight is a problem, you can try to find varieties that have some resistance to the disease.

A good practice to avoid blight is to water the plants in the morning while trying to keep the foliage as dry as possible.

The Colorado potato beetle, on the other hand, should be checked for, periodically, by examining the leaves for the mature beetle; or look for the reddish-orange egg clusters on the underside of the leaves. If a Colorado potato beetle problem gets to the point where they are doing significant damage to the plant, then insecticides (Buy Online) should be applied at the recommended rate.

Before the potatoes are ready to harvest, you should hill up dirt around the base of the plant in order to protect the developing potatoes. If any potatoes are sticking out of the soil, dispose of them immediately. The reason for this is because when potatoes are exposed to light they can become poisonous.

Potatoes can be harvested in multiple stages of development. Two to three weeks after the potato plant flowers, you can begin harvesting new potatoes, by carefully digging around the base of the plant and pulling up the immature tubers.

When are Mature Potatoes Ready to Harvest?

Mature potatoes are ready to harvest when the tops of the plants begin to yellow and die back. You can harvest all the mature potatoes at once, or let them sit in the ground for a couple weeks to harden off.

How to Dig Potatoes

Once you are ready to harvest the potatoes, you should loosen the soil around the base of the plant with a garden fork, being careful not to damage any tubers. Then, you can dig all of the potatoes up and let them dry on the soil surface for a little while, so they will keep better in storage.

How Long Will Potatoes Keep?

Potatoes keep in storage for many months in a cool, dry and dark place.

How to Grow Radishes at Home

How to Grow Apple Trees

How to Grow Pear Trees