What eats aphids? There are a number of predatory species that eat aphids. Some of the most common insectivores that eat aphids include Ladybugs, Green Lacewings, Assassin Bugs, Parasitic Wasps, Spiders, and Passerine Bird Species

On this page, you’ll find a complete list of insects and birds that eat aphids, and some of the species featured on this page can be purchased online to control an aphid infestation in your garden.

Also, if you’re looking for some quick ways to get rid of aphids in your garden scroll down to the bottom of this article.

Ladybugs (Buy Live Ladybugs Online) mainly feed on aphids, but they are a generalist predator that will prey on a wide range of soft body insects including thrips, mealybugs, whiteflies, and spider mites. The average ladybug larvae can consume up to 50 to 60 aphids a day, and adult ladybugs can eat up to 5,000 aphids over their entire life.

Green Lacewing Larvae (Buy Live Insects Online) are a generalist insect predator that will eat aphids, spider mites, caterpillar eggs, thrips, scale, and leafhopper nymphs. Early in their development green lacewing larvae will consume the equivalent of over 20 to 30 aphids per day.

As green lacewings reach maturity they will stop eating insects and begin to primarily consume nectar and pollen. However, adult female green lacewings will lay up to 200 eggs in their lifetime, providing a steady supply of green lacewing larvae that will continue to eat aphids throughout the growing season.

Assassin Bugs are highly efficient insect predators that eat aphids, leafhoppers, mealybugs, thrips, earwigs, and caterpillars. They eat aphids in all of their life stages, and they remain active all season long unlike ladybugs. Assassin Bugs are also adapted to feeding on larger prey, which makes them an excellent beneficial insect predator to use as part of an integrated pest management system.

Minute Pirate Bugs are a very common insect predator used to control small insects in field crops. They primarily feed on soft-bodied insects including spider mites, scales, thrips, and aphids. Minute pirate bugs have a total lifespan of 3 to 4 weeks, and they are extremely effective insect predators that will kill insects even when they aren’t actively looking to feed. 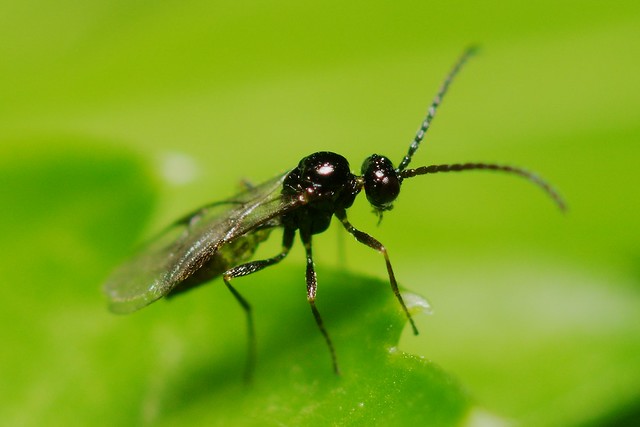 Hoverfly Larvae (Syritta pipiens) eat aphids as well as other soft-bodied insects when they are young. Once they mature Hoverfly adults primarily feed on nectar and pollen, but there are a few Hoverfly species that eat aphids and thrips well into adulthood.

Jumping spiders eat aphids along with any other insect they can spot with their superior vision. Unlike most spiders that primarily feed on flying insects, jumping spiders are ambush predators that feed on a wide range of insects including individual aphids and large aphid colonies.

The Vesper Sparrow eats aphids and other insects in the early spring when they need to provide extra protein to their young. Once their chicks have fully matured Vesper Sparrows return to eating seeds with insects making up only a small portion of their diet.

Insecticidal Soap (Buy Online) is a safe natural way to control an aphid infestation in your garden. It works by coating aphids with a thin impermeable layer of soap that clogs an insect’s spiracles, which causes the aphids to suffocate due to oxygen deprivation.

Insecticidal soap can be applied to food crops up until the day of harvest, and it’s safe to use around children and pets since it’s completely non-toxic. It also doesn’t harm the environment, and it won’t kill or disrupt beneficial insects or natural pollinators.

Neem Oil (Buy Online) is effective at controlling aphids, spider mites, and whiteflies. This safe natural oil works by disrupting most sucking insect’s lifecycle, and it won’t harm any of the beneficial insects in your garden. It’s also safe to use around kids and pets, and it can be used on crops that are meant for human consumption.

BotaniGard 22WP (Buy Online) is a natural biological insecticide that is composed of a strain of insect-killing fungus (Beauveria bassiana). These fungal spores attach to the outer Chitin shell of most insects. The fungus then grows and burrows into the insect’s body which serves as a food source for the fungus.

BotaniGard is a good choice for controlling aphids in a grow tent or greenhouse since it will naturally replicate and spread in high humidity environments with large aphid populations.

Garlic Spray (Buy Online) can be used to deter aphids from taking up residence in your garden. This natural garlic extract won’t kill insects on contact like most insecticides, but it will repel pest insects including aphids without harming or disrupting beneficial insects.

How to Grow Cherries at Home

Plants That Survive Winter Outside

What Flowers Can You Plant in October