There are many Plum Tree Varieties that you can grow at home. You’d be surprised by all the different types of plum trees with delectable fruits that span the color spectrum with beautiful shades of red, yellow, green, blue, and purple.

Continue reading this article to learn more about each type of plum tree that we have to offer.

Also, if you want to learn more about Growing Plum Trees (Click Here). 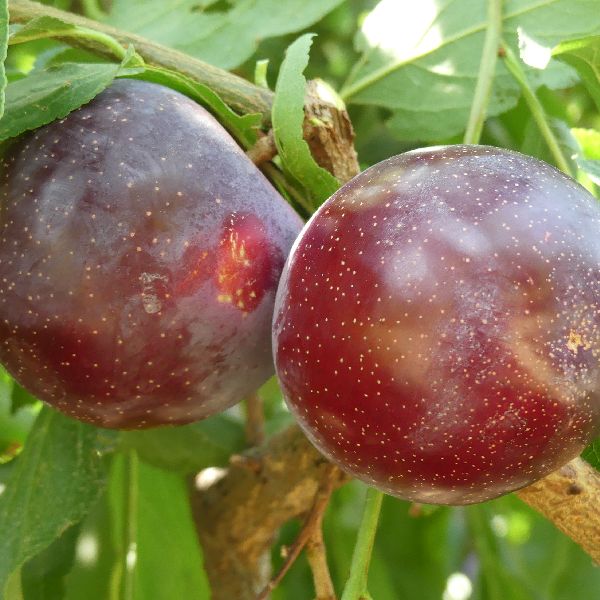 The Santa Rosa Plum (Prunus ‘Santa Rosa’) is a late to mid-season plum that was bred in the early 1900s in Santa Rosa California.  It is a self-fertile plum tree, so only need to plant one tree to enjoy a bountiful harvest.  It also puts on a lovely display of pink and white flowers in the spring that will create a spectacular visual display in landscape early in the growing season.  Those flowers will give way to deep red fruits nestled in the bright green foliage. 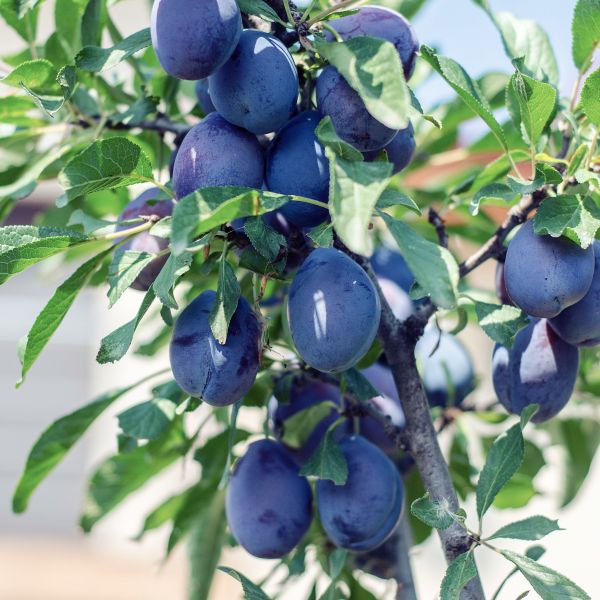 Damson Plum is one of the most cold-hardy plum tree varieties, and it’s also one of the oldest and most popular plums in America.  The Damson Plum tree starts out in the spring covered in bright white blossoms.  Then as the spring gives way to summer the flower blossoms will fall off, and a large number of plums will start form on all of the branches.  Then by late summer, the Damson Plumtree will be fully laden with bluish-purple plums with delectable bright yellow flesh. 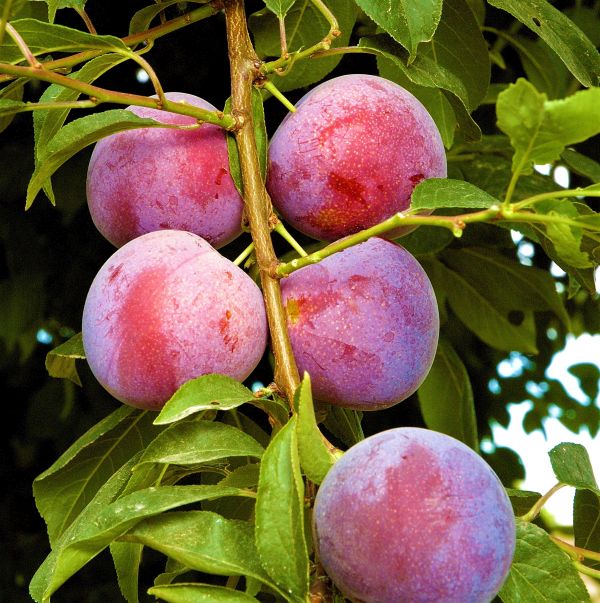 The Methley Plum is one of the fastest-growing types of plum trees that you can add to your garden.  This plum tree starts off the spring with snow-white blossoms that have a subtle sweet fragrance that will permeate your landscape.  By mid-summer, the branches of the Methley Plum will be covered in medium to large plums.  The fruit is absolutely stunning with reddish-purple skin and a flesh that has a deep crimson color.  The plums are also very soft and sweet so they work well in pies, jams, and jellies.  The Methley Plum is also self-pollinating, so you only need to plant one tree in your yard for a large harvest. 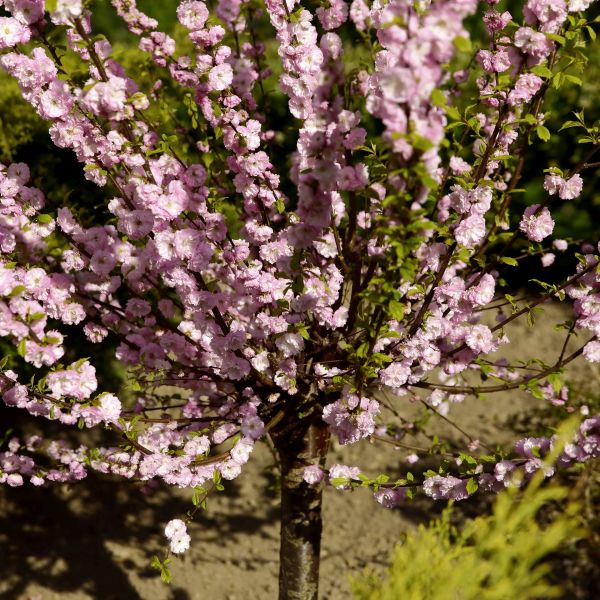 The Double Flowering Plum (Prunus triloba) is an ornamental plum tree variety that puts on a beautiful display of double pink flowers early in the spring.  This plum tree doesn’t produce fruit since the flowers are sterile, but it is one of the most stunning ornamental plum trees.  Even after the flowers fall off in the summer the tree maintains a stately rounded form accented by bright green foliage.  Then as the fall sets in the leaves turn a deep bronze-orange color that looks amazing in a late-season garden.

The Italian Plum Tree produces a large harvest of freestone fruit that are prized for their superior flavor.  This plum tree starts out each season covered in light pink flower blossoms that fill the air with a lovely aroma.  Then the flowers give way to medium-sized fruits with deep blue-purple skin, and yellow flesh, and when these plums are cooked the juices take on a deep red color.  The Italian Plum tree is also Self-Fruitful, so works well in a small yard where space is limited

The Green Gage Plum, (Prunus domestica subsp. italica var. claudiana), is a European plum tree variety that produces oval-shaped fruit that has bright green skin and light green flesh.  It ripens late in the season in mid-September, and it flowers later than most plums, so it can handle late frosts which makes a great choice for colder climates (Zones: 5-8).  The fruits are considered to be some of the best dessert plums since they are extremely sweet and tender.  The Green Gage Plum is also very productive, and since the fruits blend in with the foliage they are less likely to be eaten by wildlife before they are ready to harvest. 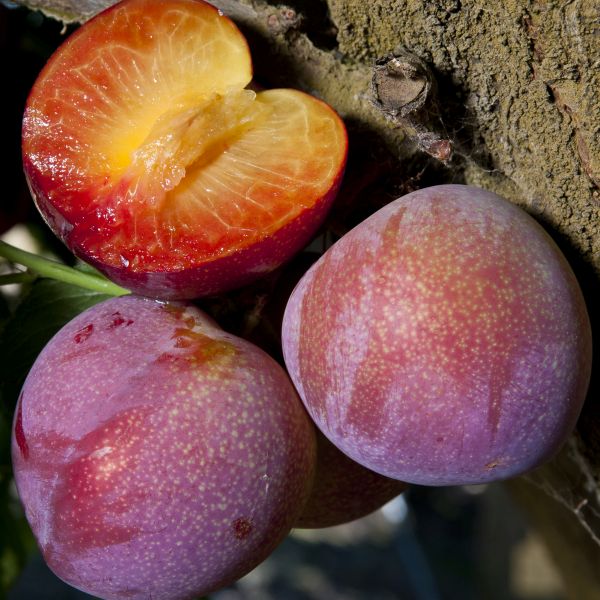 The Beauty Plum, Prunus salicina lives up to its name since it makes a beautiful ornamental tree that also happens to produce fruit as an added bonus. This plum tree variety puts on a lovely display of delicate with flowers in the early spring, and then it sets some of the most beautiful globe-shaped plums with red skin and amber flesh.  The fruits ripen early in late-June into mid-July, and the Beauty Plum Tree has low chill hour requirements, so it’s an excellent plum tree for warmer climates.Th 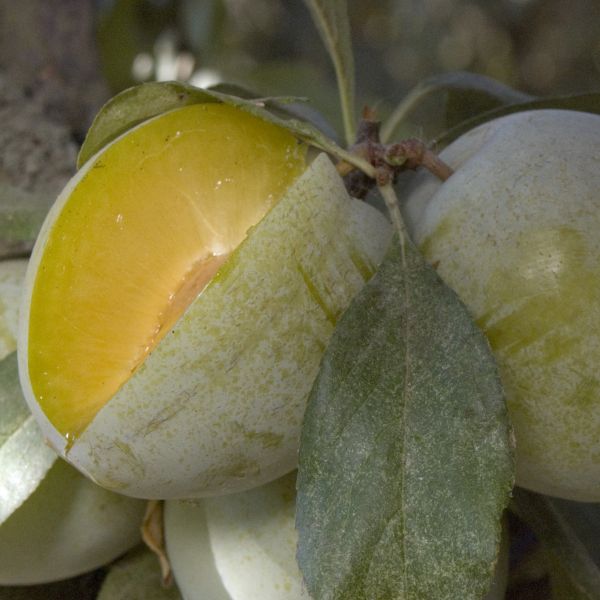 The Emerald Beaut Plum might look different than most plum trees since it produces fruit with light green skin with crunchy orange flesh.  But don’t let that fool you since Emerald Beaut outperforms purple plum trees in blind taste tests.  It was originally bred to have the sweetest flesh since it was originally bred for the commercial market. The fruit will also stay ripe on the tree for up to 2-months, and the longer the fruit stays on the branch the sweeter it gets.  They Emerald Beaut does need a pollinator though, so it’s a good idea to plant it with another type of plum tree like Burbank, Santa Rosa, or Burgundy. 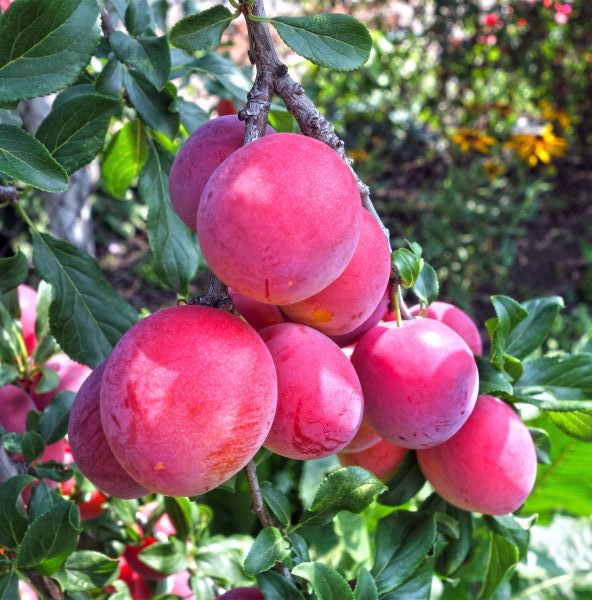 The Bruce Plum Tree is one of the easiest plum trees to grow in a small home orchard.  Bruce is across between the Abundance plum, Japanese plum, and the common Chicksaw plum varieties from North America.  This heritage gives the Bruce plum excellent disease resistance and heat tolerance, so you can plant this plum tree in warmer areas with low winter chill hours.  You’ll also get fruit from this tree early int the since it’s one of the fastest ripening plum tree varieties. Bruce does require a pollinator to produce fruit since it’s not sell-fertile. 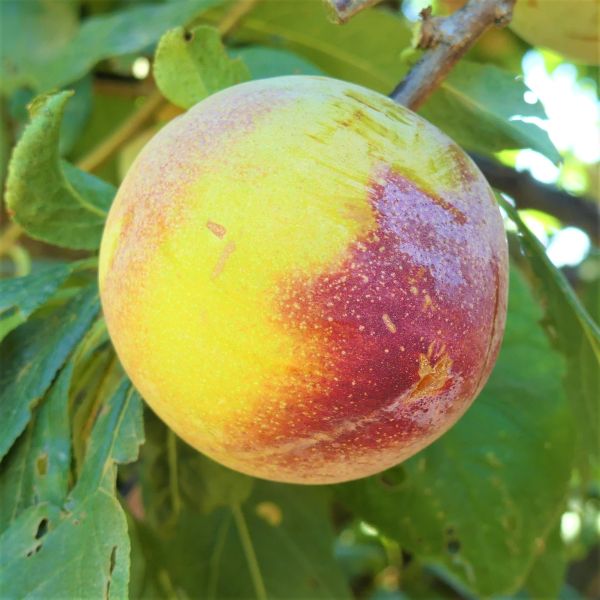 The Burbank Plum (Prunus salicina) was created by the master plant breeder Luther Burbank. This is a semi-dwarf plum tree that you can plant in a small yard since it doesn’t take much space.  It also is a very hardy tree and it’s frost tolerant so you can plant it in Zones: 5-9.  It also produces semi-freestone fruit that has rich classical plum taste, and the fruit will continue ripening on the tree and keep improving its flavor.  It does need to be planted with another plum species to produce fruit since it’s not self-fruitful, and it should be planted alongside other mid-season ripening plums like Santa Rosa, Burgundy, and Methley Plums. 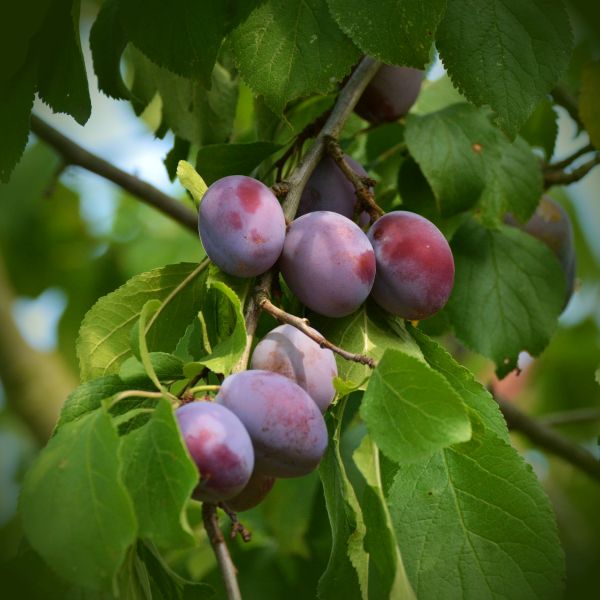 The Sugar Plum is one of the oldest plums currently cultivated, but still remains extremely popular thanks to its extremely sweet fruits.  As their name implies sugar plums have the highest sugar content of any plum.  They originally were grown in Asia, and they were popular in England and Germany, and they were brought along to America by German immigrants.  Sugar Plum trees stay relatively compact so they can be grown in small yards, and they are self-pollinating, so you only need to plant one tree to get a bountiful harvest.  They also tolerate a wide range of soil conditions and they prefer to grow in full sun with plenty of access to water.  If you can provide the tree with a suitable place in your yard they will reward you with the sweetest reddish-purple fruits that you have ever tasted 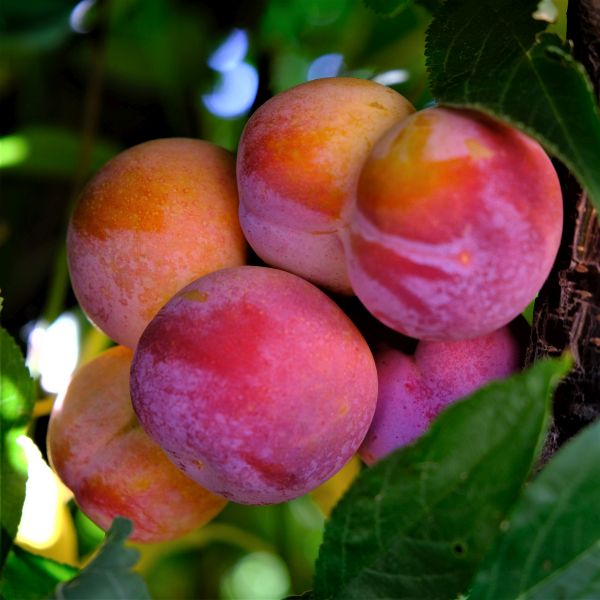 The Toka Plum Tree (Prunus ‘Toka’) is a classic plum tree variety that has been gracing orchards with its beautiful flowers and delicious fruits since 1911.  Toka plums are some of the most unbelievably delicious plums with a taste that’s similar to candy or bubblegum.   They are also one of the best types of plum trees to plant if you want to attract pollinators like bees and butterflies into your garden.  That’s because each spring this tree is covered with showy self-fertile flowers that produce and an abundance of pollen.  So, if you’re looking to raise bees for honey then the Toka Plum tree will keep your hives buzzing. 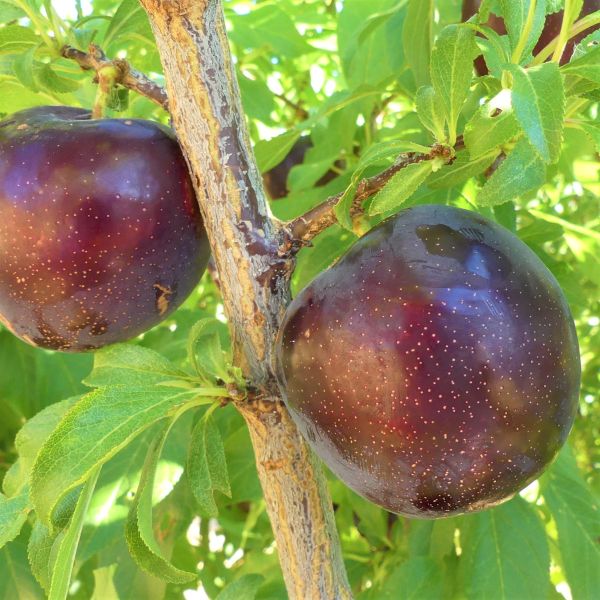 The Burgundy Plum (Prunus salicina ‘Burgundy’) will yield more fruits than most other types of plums, so if you want a tree that’s a heavy producer then Burgundy is your best option.  Burgundy is also a self-fruitful plum tree variety, so you won’t need to plant another plum tree to reap a tremendous harvest.  The Burgundy plum also has ornamental appeal in the spring with bright white flowers, and deep red fruit contrasting the light green foliage.  Then towards the end of the growing season, the leaves will turn red giving you a beautiful display of fall color. 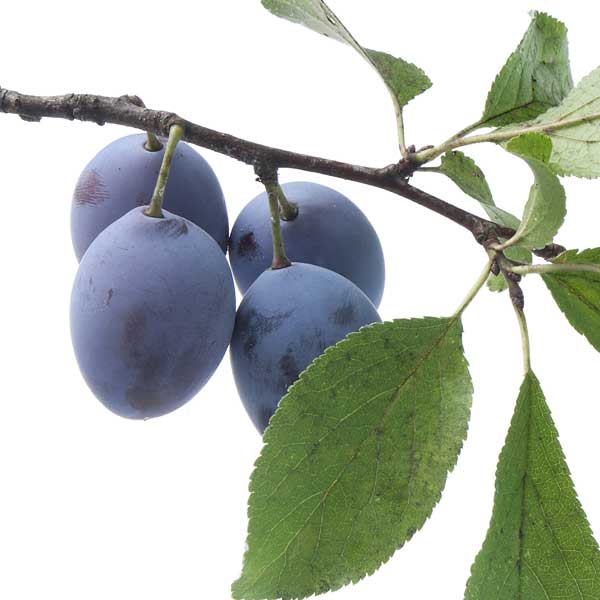 The Brooks Plum Tree (Prunus domestica ‘Brooks’) is one of the most popular plums for drying, and most of the prunes you’ll find at the store are Brooks Plums.  They produce an abundance of white self-pollinating flowers in the spring.  Then they start to form the deepest blue plums with yellow flesh, and the fruits remain relatively small which makes them great for fresh eating and drying.  The fruits also store well after harvest and Brooks plum trees are reliable produces, so you can expect large consistent harvests for years if you plant a Brooks Plum tree in your garden. 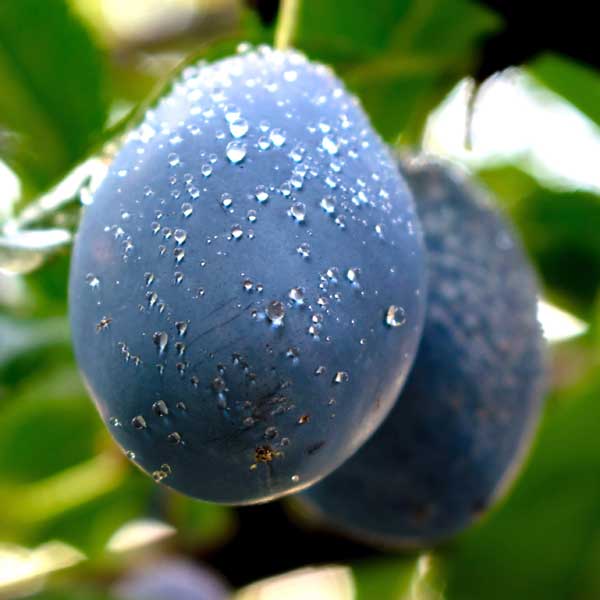 The French Petite European Plum Tree, (Prunus ‘French Petite’) was originally cultivated in a historic french orchard, and it was brought to California in the 19th century.  This heritage plum tree variety produces fruit that has a heavy white bloom covering blue-purple fruits that have a rich golden flesh. French Petite Plums are great for making prunes since they don’t have a high sugar content, so they won’t ferment during the drying process.  They also make a great addition to jams, puddings, preserves, and pies 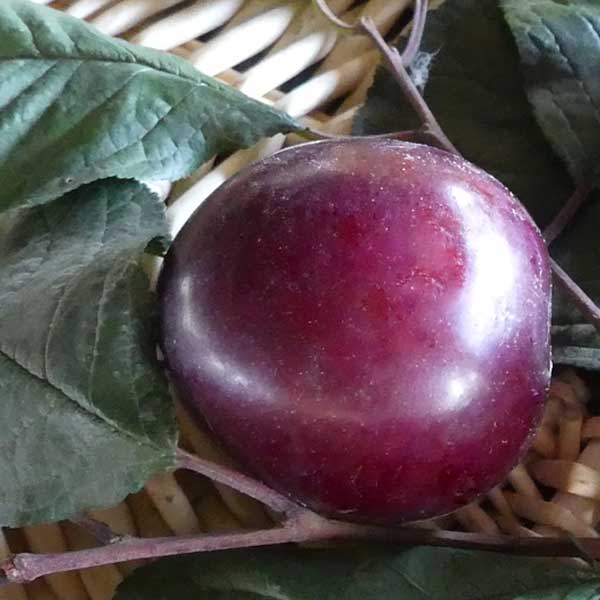 The Hollywood Plum Tree (Prunus x ‘Hollywood’) is an early-season plum tree that’s still very cold hardy.  It has a nice upright growth habit, and it is self-pollinating so you only need one plant to reap a considerable harvest of flavorful juicy plums. The Hollywood plum also lives up to its name since it starts out in the spring with pink buds that slowly turn into white flower blossoms.  It also has unique dark purple foliage that remains that color all season.  Then the ruby-red fruits star to form that really stand out against the dark foliage.  The red coloration of the fruits also extends into their flesh, and they are one of the sweetest antioxidant-rich plums that are sure to be a summertime favorite. 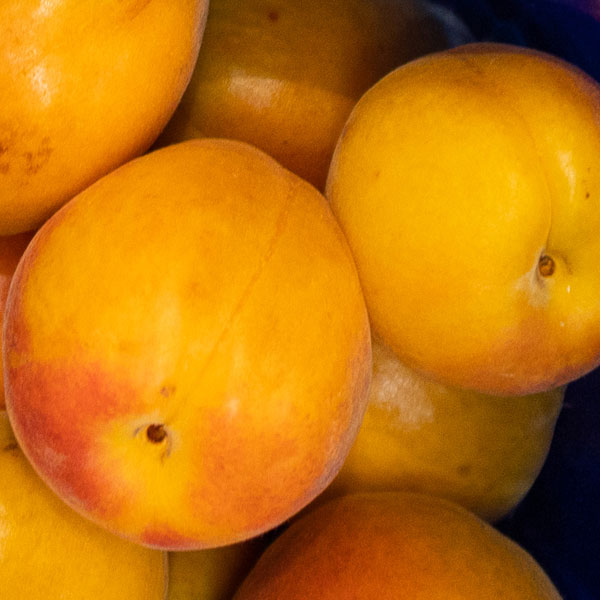 The  Howard Miracle Plum Tree (Prunus salicina ‘Howard Miracle’) is a popular plum that isn’t commonly found in the supermarket.  These specialty plums are prized for their fresh eating qualities, and they have an almost tropical flavor with hints of pineapple and honey.  They are a mid-season plum that has a low chill hour requirement, but they aren’t self-fruitful so they need to be planted with other mid-season plum tree varieties like Santa Rosa or Hollywood Plum Trees.

How to Grow and Care for Celosia

How to Grow Asters